We are all now well aware of the impact COVID-19 pandemic has wraught on tourism based economies around the world. It has been devastating to say the least. The economy of Koh Samui almost entirely dependent on visitors is no exception, and despite efforts to welcome domestic tourists, arrivals have plumeted to unprecedented levels. However, if we stand back and take a long term view looking back in time to similar disasters and events we see that societies and economies do inevitably bounce back and confidence in better times ahead begins to grow once again. Hard to see at this moment but if we try to look beyond the worst effects of COVID-19 what can we expect for Koh Samui? We at Sunway Samui have gathered statistics on arrivals at the Samui airport for recent years and have put them in to a useful graphic (below).

From 2010 arrivals at Samui International Airport had steadily increased reaching a peak of 1,325,251 passengers in 2018, up substantially over the 5 years from 2013 when it was sitting at just under one million. Such an increase was perhaps unsustainable and by 2016 the rate of growth had started to ease, slowing to a mere 0.57% increase in total arrivals between 2017 and 2018 and a year on year drop of 8.78% in 2019.

One thing that has not seen much variation is the seasonal patterns. May, June and November remain the lowest months of the year. The northern hemisphere summer holiday month of August remains high and Samui's long high season from late December through to April has not changed much over the last three years. One noticeable glitch was the sudden and large drop in the number of Chinese tourists during their long Golden Week holiday period at the end of September and first 10 days in October 2018. A year later in 2019 this drop appeared to have been reversed – marking a sign that the Chinese market had begun to bounce back in the months leading up to the start of the COVID-19 pandemic.

In summary, there is no avoiding the fact that Samui had been experiencing a fall in demand pre-COVID. In the challenging times ahead as tourism starts to reignite and the pandemic is brought under control local authorities, tourism service providers, and those charged with marketing Samui as a quality holiday destination will have much work to do. Continued investment in quality brand hotels with several scheduled to open over the next 12 months shows that there is continued confidence in Samui's future growth. One thing that is certain, there will be many people around the world waiting on the starting blocks to head off to their favourite holiday spots as soon as international travel recommences. Samui, is in a good position to benefit from that surge – it is up to those with a vested interest to make sure the holiday island is ready.

Please note that numbers in the graph are only showing Koh Samui Airport arrivals. Significant number of travellers who arrived to Suratthani Airport or other regional airports and travelled to Koh Samui by ferry are not reflected in the graph. 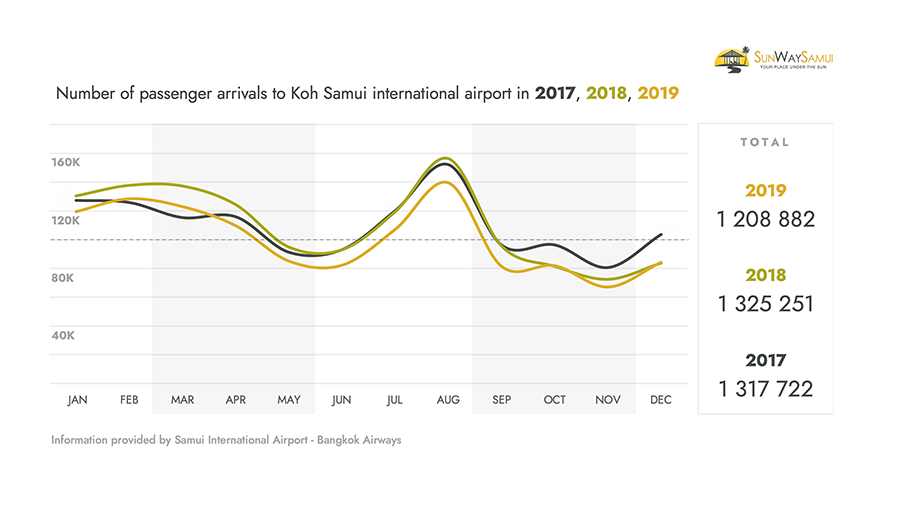 Thank you!
We received your inquiry for video call

Here are 5 things to consider to help you buy your dream luxury villa.

Buying a Property with Cryptocurrency in Thailand.

Expertise Beyond the Standard Agency Advice.

Here are 5 things to consider to help you buy your dream luxury villa.

Buying a Property with Cryptocurrency in Thailand.

Expertise Beyond the Standard Agency Advice.